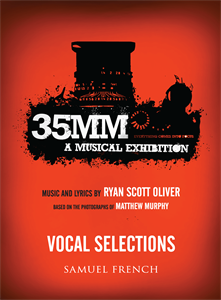 
A picture is worth 1,000 words -- what about a song? Can a picture inspire a song or fifteen? In 35mm, each photo creates a unique song, moments frozen in time; a glimmer of a life unfolding, a glimpse of something happening.

A stunning new multimedia musical which explores a groundbreaking new concept in musical theatre... This intricately woven collection of stories told through song re-imagines what the modern American musical can be.
REVIEWS:

"...the songs are not related except that they are all vibrant expressions of a rainbow of emotions. When pieced together...this musical is a thought-provoking, soul-searching explorations of two mediums fused together as one... There are intense group numbers featuring the powerful ensemble that really move the audience."

"The genius of this show is how Ryan Scott Oliver's music convey's the message of Matthew Murphy's photographs. I was constantly amazed at how the songs really spoke to each picture individually. Ryan's music is a fresh sound that was very enjoyable to listen to."

"When theater pundits talk about the future of Broadway and the new generation of composers, they're talking about artists like Ryan Scott Oliver... a major new voice in musical theater."

"The best composer working today without a major production."

Premiere Production: In 2012, Ryan Scott Oliver premiered 35mm: A Musical Exhibition based on the work of photographer Matthew Murphy.