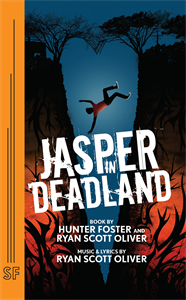 "Foster and Oliver unleash their cleverness in this playful, energetic and wide-ranging new musical."


Jasper is lost in the living world. When you're failing classes, kicked off the swim team, and your family is on the skids, life can feel like it's going to hell. Yet, in all the disappointment, Jasper has his best friend, Agnes. In one night of teenage passion, Jasper and Agnes consummate a years-long friendship. But in the morning Agnes is gone, telling Jasper to meet her at their cliff. When he arrives there's no sign of his best friend, only a swirling vortex to another world in the water below. Jasper dives into Deadland.

Jasper in Deadland features a thrilling pop-rock score from Ryan Scott Oliver, with a compelling book by Hunter Foster.
REVIEWS:

"Foster and Oliver unleash their cleverness in this playful, energetic and wide-ranging new musical."

"An electrifying surge of theatrical energy! Jasper in Deadland marks the arrival of Oliver as a major new voice in Musical Theatre."

"A Magnificent Musical! Jasper in Deadland is a journey of self-discovery that moved me in such a way that it brought tears to my eyes. Bravo for Deadland!"

Premiere Production: Jasper in Deadland premiered in a production by the Prospect Theater Company in New York City in March 2014. The play then officially opened at 5th Avenue Theatre in Seattle, WA in April 2015. Both productions were direacted by Brandon Ivie.