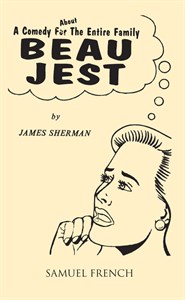 Hilarious and quite moving. Sherman wonderfully blends farce with a genuine insight.


Sarah is a nice Jewish girl with a problem: her parents want her married to a nice Jewish boy. They have never met her boyfriend, a WASP executive named Chris Kringle.

She tells them she is dating a Jewish doctor and they insist on meeting him. She plans a dinner party and, over the heated protests of Chris, employs an escort service to send her a Jewish date to be Dr. Steinberg.

Instead, they send Bob Schroeder, an aspiring actor who agrees to perform the impersonation. Happily, he is extremely convincing in the role and Sarah's parents are enraptured. Soon, even Sarah falls for Bob.
REVIEWS:

Hilarious and quite moving. Sherman wonderfully blends farce with a genuine insight.

Very funny...The well crafted play has a lot to say about nuclear families of any ethnic persuasion.

Beau Jest premiered at the Victory Gardens Theater on November 16, 1989 under the direction of Dennis Zacek.