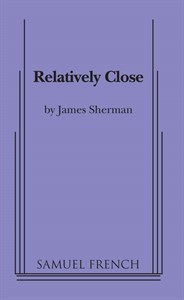 
Three sisters return to the home on the shores of Lake Michigan where they spent the summers of their youth.  Now, the sisters are grown, the parents are gone, and the house is in question.  One sister wants to keep it, one sister wants to sell it, and one sister just wants everyone to get along.  With their husbands and one disgruntled teenager all gathered together for one tense family gathering, they may find hope for the future or the downfall of the present.
REVIEWS:

Filled with laughs from start to finish!

Relatively Close received its co-world premiere at the Center for Performing Arts at Illinois State University in Normal, IL. on November 11, 2007, under the direction of Don LaCasse.
Relatively Close received it's co-world premiere at the Victory Gardens Theater in Chicago, IL. on June 16, 2008, under the direction of Dennis Zacek.