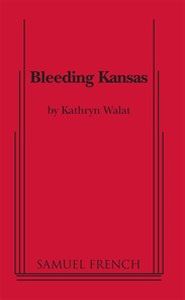 Homesteading farmers George and Kitty fight the elements to start a new life as a politically divided country takes a dangerous step towards civil war.


It's 1855, Kansas Territory. The country is divided. People are turning against their neighbors because of their beliefs. War is on the horizon. Good people will do bad things and love will grow in places it shouldn't.

A provocative, funny and insightful play revisits a crucial moment in American history. Homesteading farmers George and Kitty fight the elements to start a new life as a politically divided country takes a dangerous step towards civil war.
REVIEWS:

"To Walat's credit, her fast-moving play does not preach, merely raises questions, among them: Who are we as a nation? What shaped us and why? And does what we were --violent, intractable and destructive-- play into our present-day society? ...Bleeding Kansas is an excellent work."

"Kathryn Walat has delivered a powerful play. Bleeding Kansas is a gut-wrenching, tear-jerking drama that grabs the emotions. Its story offers plenty of parallels to present-day political and ethical issues but it doesn't hit us over the head with them. Its characters aren't Brechtian archetypes but believable flesh-and-blood human beings for whom we root and with whom we suffer."

"Bleeding Kansas offers a fascinating look at a largely unknown chapter of American history, and it does it from a very human perspective. That the prejudices and divisions it portrays mirror what's going on in America today make it especially timely."

"In this fresh new play, Kate revisits a vital moment in American history to tell an original story about political conviction, moral belief, and love of country, all told with her unique sense of humor, dramatic action and sharp insight into real people... Kate is one of the most dynamic and exciting emerging playwrights working in the American theatre."

"A tough political examination... There's much to admire and enjoy here. Walat successfully establishes a rich drama, showing that as capital-H History swirls around us, it is also lived at eye-level."

"Bleeding Kansas tightly embodies the historical conflict with a spare handful of characters... What's interesting is the psychological interplay of ethics and personalities."

HANNAH ROSE ALLEN – A young abolitionist from Boston.
EDWIN REDPATH aka RED – A pro-slavery “Border Ruffian” from Missouri.
KITTSON CLARKE – A headstrong woman following her husband George.
GEORGE CLARKE – A free-state farmer from Indiana.
JOSIAH NICHOLS – A pro-slavery farmer from Missouri.
OTHER MEN – Played by the actors who play Red, George, and Josiah, as indicated.