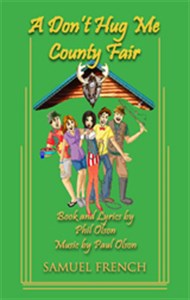 Don't Hug Me County Fair, A

A fun romp that is bound to be a popular superhit!

It's summer time and the Bunyan County Fair is approaching, the biggest thing that's happened in Bunyan Bay since the winter carnival snowplow parade. This year the Bunyan County Fair means one thing to Gunner and Clara Johnson, owners of a little bar called The Bunyan; The Miss Walleye Queen Competition. Bernice, the pretty waitress, sees this as her big chance to win Miss Walleye Queen, to be discovered, and more important, to have her face carved in butter at the Minnesota State Fair. The stakes have never been higher in Bunyan Bay. The trouble begins when Gunner's wife, Clara, decides she also wants to win Miss Walleye Queen. Bigger trouble arrives when Gunner's estranged twin sister, Trigger, (played by Gunner) shows up to try to win the beauty pageant.

Featuring 18 original songs including, "My Campfire is Burnin'," "I'm a Bunyan Woman," "If I Could Win Miss Walleye Queen," "Pontoon Ladies," "I'm Just a Pretty Forest Ranger," and "Our Butter Face Queen." Only 5 characters, a simple set, and it doesn't require a band... A Don't Hug Me County Fair is very inexpensive to produce.
REVIEWS:

I love to laugh, and I did!

I laughed so hard my sides hurt!... I loved it!' - American Radio Network'You won't want to miss the fun of this third trip to Bunyan Bay!

A fun romp that is bound to be a popular superhit!

I laughed so hard and so often that I might have damaged some of my sturdy Norwegian innards!

A Don't Hug Me County Fair was first produced at the Lonny Chapman Group Repertory Theatre in Los Angeles, California, in February 2009. It was directed by Doug Engalla.