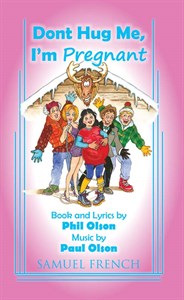 Critic's pick! Go on, go all to Don't Hug Me, I'm Pregnant! The show is guaranteed to please, and has big hit written all over it!


The story takes place in Bunyan Bay, Minnesota, in a little bar called 'The Bunyan,' owned by Clara and Gunner Johnson. Clara is 8½ months pregnant with their first child, and today she's looking forward to her baby shower, getting lots of presents, and taking a break from her raging hormones. Suddenly, a freak snow storm, a 'tsnownami,' hits Bunyan Bay and they find themselves snowed in. All roads are closed. No one can get in or leave. Gunner's worst nightmare comes true when Clara goes into labor and he realizes he's going to have to deliver the baby in the bar.

GO!... Think Rowan and Martin's Laugh In on steroids!

Critic's Pick! Go one, go all to Don't Hug Me, I'm Pregnant! The show is guaranteed to please, and has big hit written all over it!

RECOMMENDED!... With hilarious lines and 17 uproarious songs...The Olson Brothers, Phil and Paul have done it again, given us a play that keeps us laughing throughout!

ENJOY!... Wonderful characters, new terrific original songs, great choreography and belly filled laughs! ...Hysterically funny!...For those of you that love silly, funny and entertaining evenings out, this is for you!

You will find yourself literally laughing out loud at the antics of Gunner, Clara, Kanute, Bernice, and Aarvid, and having them bring a bundle of joy into the world is a good thing!

The biggest compliment you can pay a musical comedy is that it is funny...Don't Hug Me, I'm Pregnant is that and so much more...The writing is crisp, intelligent and doesn't miss a beat...proves vastly entertaining and provides a depth uncommon in theatrical comedies and musicals...hilarious yet tender...it touches the funny and musical bones!

If you're up for a break from the woes of the world, and ready to laugh until your cheeks hurt, this is the one to catch!... Guttbustingly funny, the nonstop audience laughter was thunderous!... If you're already a Don't Hug Me fan, I know you'll catch this one too. If you've never seen any of the others, it's high time you did!