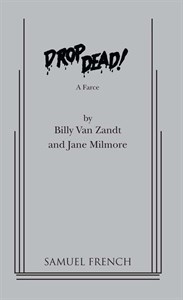 A nonstop physical comedy that turns the world of theater on its head!

Pick of the Month


A cast of has-been actors plan to revive their careers in "Drop Dead!," a potboiler murder mystery directed by "Wonder Child of the Broadway Stage" Victor Le Pewe (a psychotic eye twitching megalomaniac).

At the dress rehearsal the set falls, props break, and the producer and an actor are murdered. During the opening night performance, the murders continue. The remaining thespians must save the show and their careers, solve the mystery and stay alive for curtain calls.
REVIEWS:

A nonstop physical comedy that turns the world of theater on its head!

Drop Dead! will make your jaw drop and your head spin almost simultaneously, but you will be laughing the whole time!

Oh, how the audience loved it!

The audience laughed at everything!

Pick of the Month

Premiere Production: Drop Dead! first opened at The Cort Theatre in Los Angeles, California, on August 16, 1991. It was produced by Mitch Nedick and Edward P. Vogels. It was directed by author Billy Van Zandt.