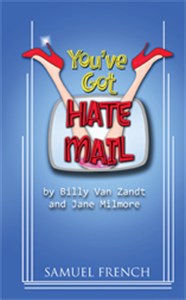 The perfect bedroom farce...riotously enacted by a five-person ensemble!

LOL! The audience is guaranteed to do just that - LAUGH OUT LOUD!


A hilarious broadband comedy of errors,You've Got Hate Mail takes an hysterical look at the world on on-line hook-ups and break-ups. In You've Got Hate Mail, love 'bytes' all when an extra-marital affair goes horribly wrong, thanks to a juicy e-mail sent to the wrong mailbox. The story is told entirely in e-mails from laptop computers, although the play still manages to have an unforgettable chase scene fueled by cell phones and PDAs.
REVIEWS:

A truly entertaining night...Hilarious fun...Be ready for the laughs...marvelous cabaret-style setting...Work it into a night-out, you'll be happy you did.

It doesn't get better than this!

You've Got Hate Mail had me doubled-over in my seat, with tears rolling down my face, unable to catch my breath. Now THAT'S the way to laugh!!!' - 94.3 The Point'This show is hands down, one of my favorites!' - 92.7WOBM'You've Got Hate Mail...is to theater as the internet is to interpersonal communications: a revolution in telling a story.

Behind this very funny theater piece lurk many surprises.

Hilarious!  Riotous! I haven't enjoyed theater like this since the days of the late Charles Ludlum and his Ridiculous Theatrical Company! I CAN'T RECOMMEND THIS PLAY ENOUGH!

Witty and fast paced, You've Got Hate Mail packs a lot of laughs (and great dialogue) into 80 minutes.

Single Gal in the City

My friend nearly peed herself laughing! Bravo! Bravo!' - 94.5PST 'It's hilarious...The timing is razor-sharp and there's never a lull in the proceedings.

The perfect bedroom farce...riotously enacted by a five-person ensemble!

A funny play! The verbal zingers fly fast and furious!

LOL! The audience is guaranteed to do just that - LAUGH OUT LOUD!

The dialogue is funny and fast-paced, and each character in the ensemble is equally strong... I laughed my ass off!

A rapid-paced romp with a millennium twist! Hilarious!