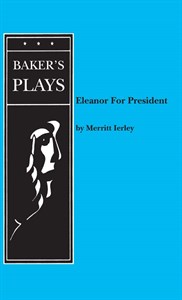 A woman as Chief Executive? The 2008 presidential campaign proved it possible, yet it just might have happened more than half a century earlier.

A woman as Chief Executive? Today's political climate makes it more likely than ever, yet it just might have happened in the last century.
Eleanor Roosevelt, First Lady from 1933 to 1945, might have run for president after the death of her husband, Franklin. Many thought about it, some talked about it, a few actually suggested it. That Eleanor Roosevelt did not seek public office was of her own choosing, and chiefly reflected her own priorities as well as a sense that the time was not yet right.
Act I of Eleanor for President briefly scans her career to a point where she might have run. Act II fictionalizes the fork in the road not taken. The net result is a unique, sometimes witty, and always insightful look at Eleanor Roosevelt and the political process.