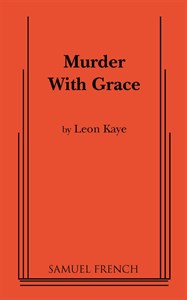 Two young women plot to kill one of the young women's potential sister in law. The girl is horrible and has a high pitched laugh that can make you shudder.


Set in the early 19th century, Murder with Grace tells the story of Grace, who is horrified when her brother is betrothed to Naomi, a shallow, silly girl whom Grace cannot stand to be around. She is loath to think that Naomi will soon be her sister-in-law, and so she and her good friend Beth devise a plan to manipulate Naomi by convincing her that another, much more affluent, young man named Henry is interested in marrying her.
They set the plan in motion before they have actually met Henry, and it works too well - when Grace finally meets Henry, she falls head over heels for him! To make matters worse, Henry returns Naomi's attentions! It seems that Grace's only alternative would be to murder the wretched girl - that would not be very mannerly... but what alternative does she have? A dark comedy that will have even the most stoic of audiences in giggles.