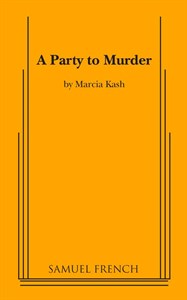 Party to Murder, A


Six people have come in secret on Halloween to play a murder mystery game at a rustic island cottage. Invited by writer Charles Prince, they appear set for a weekend of fun until ghosts from the past begin to haunt the proceedings and it becomes clear that all is not as it seems.

The game takes on a sinister dimension when guests begin to die and the remaining players realize that they are playing for their lives. Tension rises. Secret passageways, incriminating letters, hidden compartments, bodies in the window seat and a twenty five year old unsolved mystery twist and turn toward the unexpected and terrifying conclusion.
REVIEWS:

Brilliant, even better than Agatha Christie's And Then There Were None.

Christie meets Deathtrap [with] a lot of style.

Premiere Production: A Party to Murder was first produced at Kawarth Summer Theatre in Lindsay, Ontario, Canada in August, 1996. It was subsequently produced at the Ensemble Theatre in Cincinnati in September, 1996.