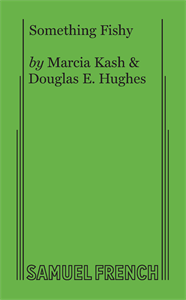 "Lighthouse Theatre has landed a great catch!...It skewers politics, politicians, the media, environmental and economic issues and even community theatre itself."


In this timely political farce, presidential candidate Raymond Bream comes back to his hometown of Port Pilchard to make a major announcement that will likely win him the election. Meanwhile the incumbent, President Weever, has sent a couple of henchmen to town to prevent Bream from making his speech -- by any means necessary.

The showdown takes place on the stage of the local community centre where an amateur theatre troupe is about to open their latest production, The Vicar's Knickers. As the world of politics encounters its natural cousin -- the world of farce -- everyone is forced to don disguises and take on numerous roles, and suddenly no one is who they appear to be. Will Bream get to the podium to make his speech, or will the president's hatchet men win the day?
REVIEWS:

"Lighthouse Theatre has landed a great catch!...It skewers politics, politicians, the media, environmental and economic issues and even community theatre itself."

Premiere Production: Something Fishy was commissioned by Lighthouse Festival Theatre in Port Dover, Ontario, Canada and received its premiere productions on June 30th, 2016.