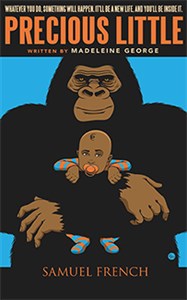 Brodie, a gifted linguist, learns unsettling news about the baby she carries. Unable to get comfort from her girlfriend, she finds it in the two least likely sources imaginable: the elderly speaker of a vanishing language…and a gorilla at the zoo.
Madeleine George’s irreverent and charming new play reveals the beauty and the limits of human language.
REVIEWS:

Just sit in your chair and let George's ideas and words flood over you and raise you up. Her use of language is at the same time incredibly economic and hugely expansive.

An 80-minute little gem that makes a big impression.