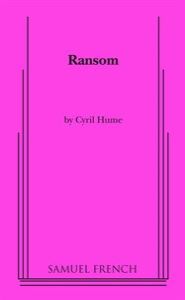 Appeals to the noblest, most decent, most universal emotions in all humanity.

Two of Hollywood's top-drawer writers have here written a play that begins with an American family on any normal morning, and culminates in one of the most chilling dilemmas in the literature of the theatre.
Davie's father is a rich manufacturer who promises to help him build a tree-house when he comes home from school. But Davie does not come home today. From their worried calls, his mother and father learn that he has been kidnapped from school by a woman impersonating his pediatrician's nurse. Then comes the demand for ransom: half a million dollars. His father is to give the kidnappers a signal on the TV program which his firm sponsors. Meantime, they sweat out the waiting period and wonder if Davie will ever be seen alive again.
At the very last moment, Davie's father makes the ultimate moral decision in the life of himself and his family. He preempts the MC's spot to make one of the most startling extemporaneous speeches ever heard. He shows the money, and then says that he will not pay it. He demands the return of the boy unharmed and promises not to prosecute. But failing this, he promises to offer the half million as a reward for the apprehension of the kidnappers, and he asks if they think their associates would prefer them to half a million dollars. For this speech, Davie's father is universally condemned, and the mother collapses in hysterics. In the calm eye of this storm comes the shattering denouement.
REVIEWS:

Appeals to the noblest, most decent, most universal emotions in all humanity.