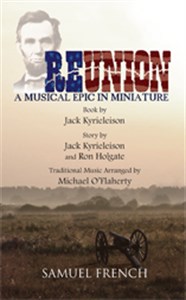 Reunion: A Musical Epic in Miniature


A ragtag company of traveling players weaves the immortal words and songs of the Civil War into a musical epic of the fight to save the Union, fusing 26 songs from the era with excerpts from personal letters and diaries.
REUNION: A Musical Epic in Miniature is a 2-act musical incorporating period songs, stories and images in a unique stage narrative of the American Civil War. Events are filtered through the eyes of a vainglorious Union commander, a devoted but skeptical aide to the president, a young Union private and the girl he leaves behind, a fugitive slave turned Union soldier, an idealistic volunteer nurse, an African-American confidant to Mary Lincoln and many others, all presented by Mr. Harry Hawk, the actor who stood on stage as John Wilkes Booth assassinated Abraham Lincoln.
Can be performed by a cast as small as 6 by using the extensive doubling written into the narrative, or as large as desired by using the alternate opening and role assignments provided.
REVIEWS:

Run to see Reunion.' -Show Business.'Stunning. Even non-Civil War buffs are sure to be captivated. This mighty little production seems twice its size.' -Stage Directions Magazine.'A marvelous combination of history and music, drama and humor. True to the history, with wonderful use of original songs to carry the audience through this extraordinary time.' -Jeff Shaara, bestselling author of Gods and Generals, The Last Full Measure.'Perhaps the best show ever to grace the stage of Ford's Theatre.

Unlike so many mindless Broadway historical pageants, Reunion's words come from the actual speeches, quotations, military orders, letters and tear-stained diaries of the figures being portrayed. And it's woven into a powerful whole that leaves no one dry-eyed. This musical deserves to travel the country the rest of this nation's days.

CRITIC'S PICK! Charming... heartwarming... brought to vivid life. Reunion underlines the common futility of all wars and the mess we're still dealing with from this particular one. You'll learn something without feeling lectured to.

A haunting glimpse into history. Reunion resonates at Ford's.