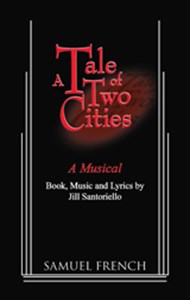 Tale of Two Cities, A, the Musical (Broadway version)

Based on Charles Dickens' masterpiece, A Tale of Two Cities is a classic story about love, revolution, and redemption.

Two men in love with the same woman. Two cities swept up in revolution. One last chance for a man to redeem his wasted life and change the world. Based on Charles Dickens' masterpiece, A Tale of Two Cities is a musical that focuses on the love triangle between young beauty Lucie Manette, French aristocrat Charles Darnay and drunken English cynic Sydney Carton - all caught in the clutches of the bloody French Revolution.
Fresh off its Broadway run, A Tale of Two Cities is the perfect addition to any theatre's season! Appropriate for all ages and audiences, this classic story of love, revolution, and redemption is what the Associated Press called, "the return to the era of big blockbusters such as Les Miserables, Phantom, and Miss Saigon."
After 17 years of unjust and secret imprisonment in France, Dr. Alexandre Manette is released from the infamous Bastille and given over to the care of his former servant, Ernest Defarge, and his wife, Madame Defarge. The Defarges send for Manette's daughter, Lucie, to retrieve him. No one knows why the doctor was imprisoned many years ago; Manette has lost his memory and can offer no explanation.
Meanwhile, the Defarges don't hesitate in showing Manette to others as an inspiration for the revolution they hope to incite. In Paris, Manette and Lucie are united and she promises to help him build a new life in England.
On their voyage home, Lucie and Dr. Manette are befriended by a young Frenchman, Charles Darnay. Darnay, the nephew of the despised Marquis St. Evremonde, has renounced his inheritance and is attempting to distance himself from the Marquis. Another passenger on the ship is John Barsad, a spy in the service of the Marquis. To ensure his nephew will never return to France, the Marquis gives Barsad false documents to plant in Darnay's belongings, incriminating Darnay as a spy against England.
Upon their arrival in England, Darnay is arrested and brought to trial. At Darnay's trial for treason, he is rescued by the efforts of a drunken but brilliant lawyer, Sydney Carton- a lost soul, cynical and self-loathing. He falls in love with Lucie Manette, who shows him an understanding and compassion he has never known. But Lucie's heart is with the Frenchman, and although Dr. Manette has misgivings about Darnay, he gives his blessing and Darnay and Lucie are married.
Soon after, they are blessed with a daughter. Carton never stops loving Lucie; he remains a close friend to them both and loves their daughter with a special tenderness.
The murder of Darnay's uncle, the Marquis, and the pleas of an old friend lure Darnay to France just as revolution begins. Upon his arrival in Paris, Darnay is arrested and charged with crimes against the people as a former aristocrat. Dr. Manette and Lucie follow Darnay to Paris and at the trial Manette speaks for his son-in-law and wins his freedom. But Madame Defarge halts the celebration, producing a letter that Manette wrote in the Bastille. The letter tells the story of Manette's imprisonment and ends with Manette's bitter curse on the Evremonde family. The crowd turns on Darnay and condemns him to death by guillotine.
Sydney Carton arrives in Paris to help Lucie and her family. Carton discovers he can gain access to Darnay through the spy John Barsad, now working in France. He also learns that Madame Defarge is not finished and plans to come after Lucie and the rest of her family. Fueled by the knowledge of this threat, Carton springs into action and makes arrangements for them to flee Paris. He then goes to the prison and tells Darnay that he has a plan to return him to his family but refuses to reveal it and begs Darnay to do exactly as he says. Darnay agrees and the story moves swiftly to its surprising and unforgettable conclusion.
REVIEWS:

"A Broadway must see! Everything is here to stir the soul -- young love, purity, vengeance, villainy, valor -- all played out against that historic revolution."

"The return to the era of big blockbusters such as Les Miserables, Phantom,  and Miss Saigon."