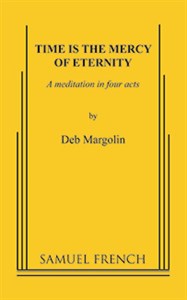 Time is the Mercy of Eternity: A Meditation in Four Acts

This play is broken down into four parts.

This play is broken down into four parts.

Clarisse and Larmon is about a husband and wife who are left with only a picture of their son's foot after he is killed at war.

The Rich Silk of It is based on a true story of a young actress who was killed by her ex-fiancee after she broke up with him. Two actors morph into different characters, primarily playing the actress and the fiancee.

Time is the Mercy of Eternity shows a woman who won't leave a display bed in a department store, even after the pleadings of a female employee. The employee is forced to call security, but doesn't want to see the other woman hurt, as she is obviously already distraught.