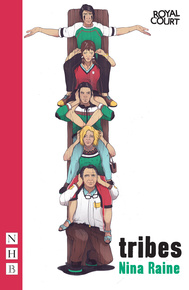 "I thought everyone's parents spoke like that. Then I realised."

A penetrating play about belonging, family and the limitations of communication.

Billy's family, like every other, is a club, with its own private language, jokes and rules. You can be as rude as you like, as possessive as you like, as critical as you like. Arguments are an expression of love, and after all, you love each other more than anyone in the world. Don't you?

But Billy, who is deaf, is the only one who actually listens. When he meets Sylvia, he decides he finally wants to be heard.

Tribes had its US premiere at the Barrow Street Theatre, Off-Broadway, in 2012, winning the 2012 Drama Desk Award for Outstanding Play and the New York Drama Critics' Circle Award for Best Foreign Play.
REVIEWS:

"At once funny and piercingly painful... Raine writes with a marvellous mixture of wit and empathy... as moving as anything I have seen in the theatre this year."

"Razor-sharp as well as utterly credible."