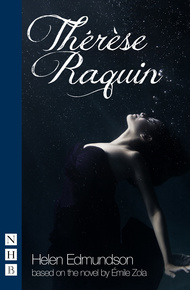 A story of lust, madness and destruction set in the backstreets of Paris.


A story of lust, madness and destruction set in the backstreets of Paris. Based on Emile Zola's classic novel.

The beautiful but doomed heroine is trapped in a loveless marriage to her sickly cousin, Camille. Every Thursday evening she watches her domineering aunt, Madame Raquin, play dominoes... until one day her husband brings along an old friend, the alluring and athletic Laurent. As Laurent and The?re?se embark on an illicit affair, a turbulent passion is unleashed that drives them ultimately to violence and murder.

Helen Edmundson's sensuous adaptation of Thérèse Raquin premiered at the Theatre Royal, Bath, in July 2014. It was later seen on Broadway in a production starring Keira Knightley.
REVIEWS:

"Period noir, a psychological thriller that will pin you to your seat as surely as a Hitchcock film."