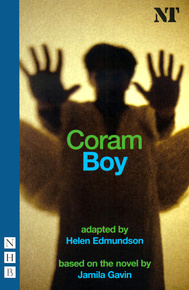 A heartbreaking tale of orphans, angels, murder and music - dramatised from the Whitbread Award-winning novel set in 18th-century England.


A heartbreaking tale of orphans, angels, murder and music - dramatised from the Whitbread Award-winning novel set in 18th-century England.
In 18th-century Gloucestershire, the evil Otis Gardner preys on unmarried mothers, promising to take their babies (and their money) to Thomas Coram's hospital for foundling children. Instead, he buries the babies and pockets the loot.
But Otis's downfall is set in train when his half-witted son Meshak falls in love with a young girl, Melissa, and rescues the unwanted son she has had with a disgraced aristocrat. The child is brought up in Coram's hospital, and proves to have inherited the startling musical gifts of his father - gifts that ultimately bring about his father's redemption and a heartbreaking family reunion.
Helen Edmundson's adaptation of Jamila Gavin's award-winning novel, Coram Boy, was first performed at the National Theatre, London, in 2005. It won the Time Out Live Award for Best Play.
Note for performers: There are three different scores available for this title. The basic score consists of a few key songs and is included in the back of the printed script. The intermediate score is a simple piano score for the whole play, and the advanced score is the full orchestral score as used in the original production. Either of these are available on CD-Rom.
Please enquire for more details, including fees for the different scores and the music rights.
The quoted performing rights fee is for the play without the music.
REVIEWS:

"A triumph... can still make your heart soar."

"The story has a gripping intensity... there is a tremendous sense of momentum."

"Family shows don't come much more harrowing than this - but nor do they come any finer... as gripping, terrifying, beautiful and moving as anything you will see in the theatre this year... Helen Edmundson's adaptation does full justice to the dark power of the original, while also transforming it into a thrilling piece of theatre."

"A highly superior show that should appeal to adults and children alike."