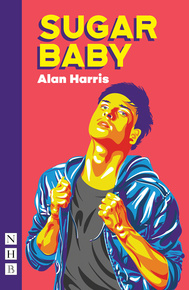 When you're a small-time drug dealer in Cardiff, it's tough living up to your family's expectations. Marc spends his time avoiding his mum, disguising his cannabis plants with fake tomatoes, and bailing out his old man, who owes £6,000 to local loan shark Oggy.

When Marc meets Lisa for the first time in years, things get even messier. Lisa wants Marc. Only, Oggy wants Lisa. Marc just wants to survive the day.

"Enormous fun… the beauty of the script lies in Harris's loving recreation of the city, from its seedy underbelly to the more salubrious enclaves. The clarity of the writing allows us to feel as though we are walking Marc's journey with him."

"A great laugh, a chaotic comedy caper set on the streets of Cardiff with a cast of petty criminals and small-time drug dealers. There's a frank dose of socio-political comment squirted in too… stonking good fun."

"A comedy cartoon caper that feels a little like Lock, Stock and Two Smoking Barrels set in Wales... Alan Harris offers a farcical, heightened view of provincial life, petty crime and never leaving the town you've grown up in."

"A piece of theatre that revels in its own ability to entertain."