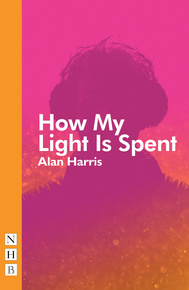 How My Light Is Spent

Every Wednesday evening, Jimmy calls Kitty. For precisely nine minutes. At £1.20 a minute.


Every Wednesday evening, Jimmy calls Kitty. For precisely nine minutes. At £1.20 a minute.
Jimmy is thirty-four, lives with his mum and works at Newport's only drive-through doughnut restaurant. Kitty is an adult chatline operator, living in the granny flat of a topiary enthusiast. Things were looking up for Jimmy, but then he loses his job and he begins to disappear, starting with his hands.
Will this unlikely duo succeed in turning each other's world upside down?
Alan Harris's play How My Light Is Spent is a funny, hopeful drama about loneliness, longing and being left behind. Winner of the Judges' Award in the 2015 Bruntwood Prize for Playwriting, it premiered in 2017 at the Royal Exchange Theatre, Manchester, in a co-production with Sherman Theatre and Theatre by the Lake, Keswick.
REVIEWS:

"Alan Harris is an offbeat purveyor of big-hearted, small-town stories… a lyrical two-hander in which the malls and call centres of south Wales seem as rich and strange as Dylan Thomas's Llareggub [the setting for Under Milk Wood]."

"Quirky, funny and charming… the dialogue bounces along wonderfully with a constant flow of witty dialogue and asides."