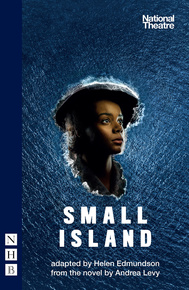 
Hortense yearns for a new life away from rural Jamaica, Gilbert dreams of becoming a lawyer, and Queenie longs to escape her Lincolnshire roots. In these three intimately connected stories, hope and humanity meet stubborn reality, tracing the tangled history of Jamaica and Britain.

Andrea Levy's epic novel Small Island, adapted for the stage by Helen Edmundson, journeys from Jamaica to Britain in 1948 – the year the HMT Empire Windrush docked at Tilbury. It premiered at the National Theatre, London, in April 2019, directed by Rufus Norris.
REVIEWS:

"A landmark in the National Theatre's history: a tumultuous epic about first-generation Jamaican immigrants... skilfully adapted... one of the most important plays of the year."

"In this inspiring adaptation, which compresses the book into a gripping three-hour state-of-the-nation epic, Small Island has found its ideal home... the show acknowledges struggle and strife on all sides, flies the flag for compassion and achieves a hard-won (and still to be fought for) inclusivity."

"A passionate engagement with the past that's sure to resonate with audiences at a time when the very idea of Britain is under such fierce scrutiny."

"This is a show that shoots arrows of empathy and engagement out towards its audience and they respond... from a novel dealing with the past [comes] a play for today."

"A moving stage adaptation of the late Andrea Levy's great novel about the Windrush generation... Edmundson does some supreme work compacting a sprawling book into a pacy three-hours-ten-minutes - she has a knack for skilfully distilling story... a ferociously entertaining three hours of theatre."

"Beautifully translated to stage by adaptor Helen Edmundson, using thrilling theatrical solutions to honour Levy's epic - and still urgent - tale... a stirring spectacle that never loses sight of the people at its heart."