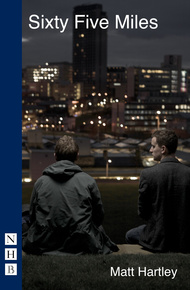 A devastating drama about family and the ties that bind us together.

A devastating drama about family and the ties that bind us together.

Pete and Rich are two very different brothers. Reunited after nine years, both are seeking forgiveness. Rich needs to confront ex-girlfriend Lucy, and the shadows of his recent past. Pete's search is for the one woman in his life he has never known, his daughter.

Matt Hartley's play Sixty Five Miles won the Under-26 Award at the 2005 Bruntwood Prize for Playwriting, and was first staged by Hull Truck Theatre in 2012.
REVIEWS:

"Hartley makes the imaginative leap towards the anxieties of middle age."

"A beautifully under-written play... as funny, unlikely and heart-breaking as life itself."