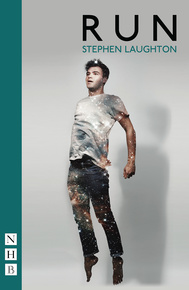 "I fall.
And run.
I fall.
With such sheer force that I hurtle through space…"


Yonni is a seventeen-year-old gay Jewish kid. It's the last day of term and he's avoiding everything. The only person he wants to be around, think about, be about... is Adam.

And as his night unfolds and falls into chaos – some of it real, some of it not – Yonni pulls us into his world. A world filled with school riots, first loves, beached whales, political demonstrations, sunshine, cinema, sex and rebellion.

Set over one unforgettable summer and encompassing all of space and time, Stephen Laughton's one-man play Run explores what it means to love, to lose and how to grow from a boy into a man. First produced at VAULT Festival 2016, the play transferred to The Bunker in March 2017, after a national tour.
REVIEWS:

"A quietly extraordinary piece of work ... artful, honest and deeply romantic, whilst still being devastating in its meditations on modern anti-Semitism."

"A masterful tale of growing up, falling in love, and loss in a time of turmoil... an intoxicating sprint from start to finish."