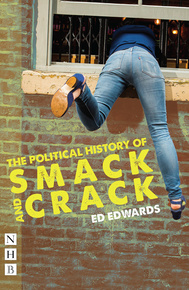 Political History of Smack and Crack, The


Crackling with anger, humour and authenticity, Ed Edwards' play The Political History of Smack and Crack chronicles the fallout for communities crushed by the heroin epidemic at the height of Thatcherism.

Shot through with home truths about the road to recovery, this is an epic love song to a lost generation inspired by the playwright's own personal experience.

The Political History of Smack and Crack was shortlisted for the Theatre503 Playwriting Award. It was first performed in Paines Plough's Roundabout at Summerhall at the Edinburgh Festival Fringe 2018, before transferring to Soho Theatre, London, produced by Most Wanted and Offstage Theatre in association with W14 Productions, Alastair Michael and Soho (co-commissioners).
REVIEWS:

"There is maybe nothing better at the whole [Edinburgh] festival… a riotously entertaining and deeply moving drama-cum-documentary… it's stylishly done, burning with a broad, Northern humour and a galvanising anti-Tory bite. It's energetic, too. Effervescent almost. Think Trainspotting, relocated 200 miles south and injected with a bitter dose of politics."

"An unsparing portrait of addiction… a desperate love story is set against a broader picture of government hostility in Ed Edwards' gritty two-hander."

"Not since Trainspotting has addiction been so entertaining… Edwards treats his characters with both affection and dignity."

"Deftly and persuasively puts the story of the titular opiates' rise in popularity in this country into perspective... Edwards' points are compelling and shocking, but what's most affecting is the characters' story. Even if you've never come near the sort of world they inhabit, it's not hard to understand their journey, or how easy it could be to get to where they each are."