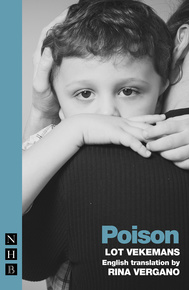 
An extraordinary play that asks a simple question: is it ever possible to move on?

Poison by Dutch writer Lot Vekemans, in this English translation by Rina Vergano, had a critically acclaimed run in New York in 2016, and was premiered in the UK at the Orange Tree Theatre, Richmond, in November 2017, directed by Paul Miller.

The original Dutch-language version of the play, Gif, was first performed at NT Gent/NL in December 2009.
REVIEWS:

"A delicate and compassionate study of grief."

"Uncomfortable but compelling viewing… this is obviously a play about how we react to bereavement and is based on acute psychological observation. But, on a wider level, this is also a play about marriage and the way separation or divorce can never erase remembered intimacies."

"An absorbing dance around the truth, in which tenderness and starkness alternate and the awkward cadences of debate are chasteningly authentic… considers the effects of grief, but instead of making pain appear poetic it portrays with sober precision the essential ordinariness of its two characters."

"Painful, powerful… a minutely realistic look at the oddly colourless nature of grieving, and the grim concrete structures that 21st-century secular society builds around it."

"Quietly unflinching… an almost forensic exploration of the hard, sharp edges of grief and loss… [has a] bruising truthfulness."