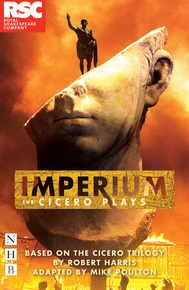 Imperium is a backstage view of Ancient Rome at its most bloody and brutal, told through the eyes of Tiro, Cicero’s loyal secretary.


Cicero, the greatest orator of his age, devotes all his energy and cunning to preserve the rule of law, and defend Rome's Republic against the predatory attacks of political rivals, discontented aristocrats, and would-be military dictators.

Imperium is a backstage view of Ancient Rome at its most bloody and brutal, told through the eyes of Tiro, Cicero’s loyal secretary.

Adapted by Mike Poulton from Robert Harris's bestselling The Cicero Trilogy, it was premiered by the Royal Shakespeare Company in Stratford-upon-Avon in November 2017 in an epic event comprising six plays presented in two performances.
REVIEWS:

"A riveting epic for our time – The West Wing in sandals."

"One of the finest achievements of the Royal Shakespeare Company in recent years… an exhilarating and timely political drama… provides both an intriguing character study and a demonstration of politics in action."

"The sheer scale of the enterprise inspires awe… Poulton distils the original trilogy with his customary combination of verbal dexterity, clear storytelling and hefty doses of leavening wit, [which] only serves to accentuate the brilliance of the undertaking… puts these dense historical epics onto the stage with all the panache and pace of a Netflix box set."

"The West Wing in blood-soaked togas… this turbulent story of bitter rivalries and criminal conspiracy is both timely and entertaining… an instructive and entertaining vision of one of history’s great self-made heavyweights."

"Ambitious, intricate and compelling… an epic undertaking… Poulton’s adaptation expertly condenses and makes clear all the complex machinations and power plays, the conspiracies, shifting loyalties and betrayals. In his hands the intricate, multi-stranded narrative moves fluidly and is never less than engaging."