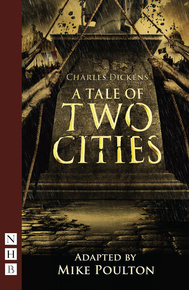 A thrilling, fast-paced adaptation of the classic novel, considered by Dickens "the best story I have ever written."


A thrilling, fast-paced adaptation of the classic novel, considered by Dickens "the best story I have ever written."

An epic story of love, sacrifice and redemption, interweaving one family's intensely personal drama with the terror and chaos of the French Revolution.

This version of A Tale of Two Cities premiered at Royal & Derngate, Northampton, in February 2014, featuring a large community ensemble alongside the main cast.

Mike Poulton's adaptation is ideal for any amateur theatre companies, schools or youth theatres looking to stage a bold and dramatic version of Dickens' classic.
REVIEWS:

"Gripping... has a cinematic quality... there isn't a dull moment."

"Mike Poulton's adaptation is brilliant... ensures no-one unacquainted with the novel will be baffled."

"Best of times, worst of times: Mike Poulton takes them both at a gallop in an adaptation that... builds up the terminal velocity of a political thriller."

"An atmospheric, appealing adaptation of a novel that remains relevant to our times."