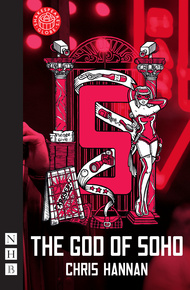 God of Soho, The

A hectic and hilarious morality tale for the modern world.

A hectic and hilarious morality tale for the modern world.
In Heaven, Big God's mind is crumbling, Mrs God has lost her looks, and their daughter, Clem, the Goddess of Love and Sex and Beauty, has been rejected by her lover and banished to Earth. Down in the streets of Soho, Clem searches for something new, and finds it in glamorous and self-loathing reality-TV star Natty, whose fetishistic love life with rock star Baz is about to hit the headlines.
Sexy, feisty and real, it is a story about love at its dirtiest, maddest and most bittersweet.
Chris Hannan's play The God of Soho was first performed at Shakespeare's Globe, London, in 2011.
REVIEWS:

"Written in a heightened, lightly learned, scatological style that lifts the show to the edge of a mythical, classical plane... vibrant, sensational."

"Best of all, though, is Hannan's writing, which is dense, beautiful and shit-spattered - rather like Soho."