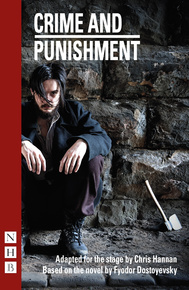 "Everybody wants to change the world. Nobody thinks to change himself."


An exciting, fresh and accessible adaptation of Dostoyevsky's masterful novel.

Starving, destitute student Raskolnikov is surrounded by the harsh injustices of the world: the grime of poverty and prostitution, unscrupulous pawnbrokers chasing debts, and a sister about to marry someone she doesn't love to keep her family alive. His guilt is unbearable. Only Sonya, a downtrodden prostitute, can offer any chance of redemption.

As Raskolnikov enters a dangerous cat and mouse game with the examining magistrate, a psychological thriller unfolds that probes how far humanity might go when driven by disillusionment and whether any crime can be justified by a higher purpose.
Chris Hannan's adaptation of Crime and Punishment was first performed at the Citizens Theatre, Glasgow, in 2013, followed by a UK tour.
REVIEWS:

"Powerful... To find a theatrical structure, adaptor Chris Hannan roams freely through the novel. He turns interior monologue into direct address, thins out subplots and reconfigures the sequence of events to fashion a fluid route through the story."

"Magnificent... a fluent, beautiful, profoundly theatrical account of one of the great stories of world literature."

"Both a classic come to life and an urgent new work which develops its own style and language rather than slavishly imitating the text and it’s all the better for it."