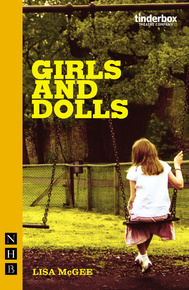 A striking play from Northern Ireland about two women and the childhood tragedy they'll never be allowed to forget.


A striking play from Northern Ireland about two women and the childhood tragedy they'll never be allowed to forget.
For Emma and Clare, 1980 was the summer they met at the swings, the summer they built a tree house and stole from Dennis O'Donnell's shop. The summer a young mother and her infant daughter moved into number 14...
Now in their thirties, Emma and Clare struggle to come to terms with the chain of devastating events that began that summer, to understand what they did, what they became and how they were judged.
Lisa McGee's play Girls and Dolls was first performed by Tinderbox Theatre Company on a tour of Northern Ireland in 2006. It won the Stewart Parker Trust Award in 2007.
REVIEWS:

"Lisa McGee adds a new twist to a well-worn genre in this upsetting and powerful play about repressed memories."