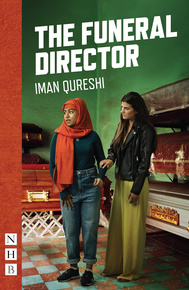 "I just thought it would be a secret I’d have to die with. And now – I think it’ll be what kills me."

Life as the director of a Muslim funeral parlour isn't always easy, but Ayesha has things pretty sorted. She and Zeyd share everything: a marriage, a business, a future.

Until Tom walks in to organise his boyfriend's funeral. A snap moral decision, informed by the values of Ayesha's community and faith, has profound consequences.

Forced to confront a secret she has hidden even from herself, Ayesha must decide who she is – no matter the cost.

Iman Qureshi's play The Funeral Director is an incisive and heartfelt story of sexuality, gender and religion in twenty-first-century Britain. It won the 2018 Papatango New Writing Prize and premiered at Southwark Playhouse, London, in October 2018.
REVIEWS:

"Very clever… plenty of moral meat to sink your teeth into."

"A bit of a cracker... Iman Qureshi's play tackles, with grace and dignity, the tricky subject of Islamic attitudes to same-sex relationships. It's a play that makes a humane point without lapsing into preachiness."

"A sensitive and nuanced exploration of sexuality and the Islamic faith... elegantly drawn."