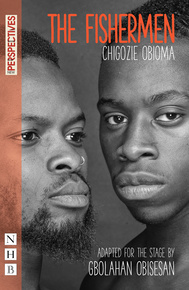 The Fishermen is a powerful allegory of brotherhood, vengeance and fate.

In a small Nigerian town, Ben and Obembe, along with their two older brothers, slip away to fish at a forbidden river. Unnoticed and carefree, they keep coming back until one day a madman's prophecy changes the course of their lives forever.

Adapted by Gbolahan Obisesan from the Man Booker Prize-shortlisted novel by Chigozie Obioma, The Fishermen is a powerful allegory of brotherhood, vengeance and fate. It was first seen at HOME, Manchester, in 2018, before a tour of the UK including the Edinburgh Festival Fringe, in a co-production between New Perspectives and HOME.
REVIEWS:

"Beautiful and memorable... something very special."

"Gbolahan Obisesan has skilfully distilled this tragic story… [has] near-mythic qualities, exploring the bonds of family and the individual’s ability to defy fate."

"A supreme piece of theatre… what comes across most powerfully is the bleed between imagination and memory, as re-enactment can turn into trauma, and play can stop being play."