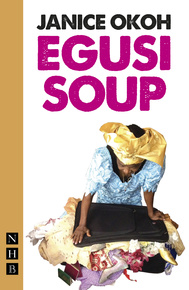 It's the anniversary of John Anyia's death, and the Anyias are packing their suitcases, preparing to head home to Nigeria for a memorial service in his honour. But before they go, they're going to have to get rid of some excess baggage.

Janice Okoh's play Egusi Soup was first performed as a script-in-hand performance at Menagerie Theatre Company's Hotbed Festival in July 2009 and, in October 2009, embarked on tour in a co-production with Eastern Angles. It was revived in 2012 in a co-production between Menagerie and Soho Theatre, in association with the Mercury Theatre, Colchester.
REVIEWS:

"Entertaining and revealing... you want to see more from this writer."

"A new work showcasing extraordinary writing... both sensitive and accurate in its portrayal of a modern British-Nigerian family... a triumph."

"Okoh's play is punchy and funny, and generates much laughter of recognition."