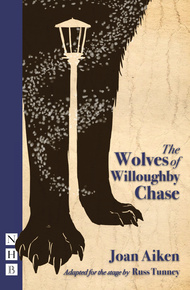 A thrilling, funny and spectacular adaptation of Joan Aiken's classic children's novel, perfectly suited to performance by theatre companies and drama groups of any size.

A thrilling adventure set in an alternative history of England, The Wolves of Willoughby Chase tells the story of two brave and determined girls as they fight against ferocious wolves, snowy wastelands and their very evil guardian, Miss Slighcarp. The opening of the Channel Tunnel has led to dangerous wolves roaming Britain, but this is not the only danger that cousins Bonnie and Sylvia, and their friend Simon the Goose-boy, must face as they encounter unforgettable characters and mysterious scheming.
Russ Tunney’s magical adaptation of The Wolves of Willoughby Chase was first performed at the Layard Theatre, Wimbourne, in 2010. It was originally performed by a cast of five, but it has also been staged by – and is suitable for – much larger casts.
Featuring a chorus who narrate, sing and comment on the action, and plenty of opportunities for song and dance, this version will suit any theatre company, youth theatre or drama group wanting to exercise their theatrical imagination.
REVIEWS:

"A gift for any company as family entertainment... Expertly blends melodrama, comedy, adventure and a little spookiness, interwoven with songs and dances... Wonderful stuff."

"Satisfying, funny and exciting... this ingenious show makes a children's favourite live on."