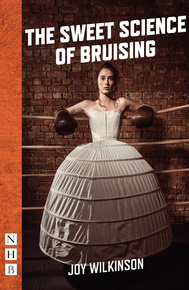 Sweet Science of Bruising, The

"When that bell rings, your life is entirely in your hands."


London, 1869. Four very different Victorian women are drawn into the dark underground world of female boxing by the eccentric Professor Sharp. Controlled by men and constrained by corsets, each finds an unexpected freedom in the boxing ring.

As their lives begin to intertwine, their journey takes us through grand drawing rooms, bustling theatres and rowdy Southwark pubs, where the women fight inequality as well as each other. But with the final showdown approaching, only one can become the Lady Boxing Champion of the World...

Joy Wilkinson's play The Sweet Science of Bruising is an epic tale of passion, politics and pugilism. It premiered at Southwark Playhouse, London, in October 2018, in a production by Troupe.
REVIEWS:

"A fascinating, full-blooded play... takes a well-aimed swing at the politics of sex and class, putting female characters in the ring... the stage, and the story, belong to the women: a knockout."

"An unsettling mix of self-discovery and violence, which challenges traditional ideas about what women should be and what they should do... this account of female empowerment is as timely as it is original."