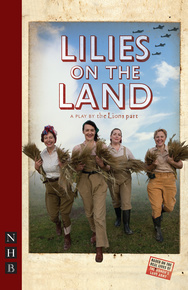 Lilies on the Land

A revealing, funny and wonderfully moving portrait of four women who sign up to join the Women's Land Army during World War II.


A revealing, funny and wonderfully moving portrait of four women who sign up to join the Women's Land Army during World War II.

Based on one hundred and fifty letters and interviews with original Land Girls, along with songs from the period, Lilies on the Land charts the personal journeys of four women who join the Women's Land Army -- determined to work endless backbreaking hours on farms across the country in a bid to do their best for the War Effort.

But how do these women, all hailing from different walks of life, torn from their families and bereft of all basic home comforts, deal with the hardships of farming life and the pressures of war? Maybe work clothes full of mice and toilet rolls falling from the sky are just what it takes for these girls to get through...

Lilies on the Land was devised and first performed by the Lions part in a 2001 touring production. It was revived at the Arts Theatre in the West End in 2010, and then toured in 2011 and 2012.

This edition includes notes on staging and performing the play.
REVIEWS:

"Poignant and humorous... it's impossible not to be awed."

"Wonderful... beautifully crafted... has the satisfying tang of lived experience... one leaves the theatre moved, amused and with the strong conviction that one has encountered the British character at its absolute best."