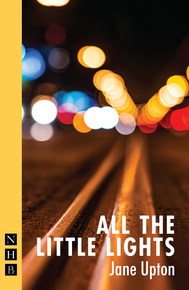 All the Little Lights

"I know you want what everyone else wants. A family. A home. But you'll never have it. Cos of what's inside of you."

Joanne and Lisa were like sisters. Then Lisa left. Now they're back together for one last birthday party by the railway tracks. But can they salvage their friendship, or will ghosts of the past haunt them forever?

Poignant, moving and darkly funny, All the Little Lights is the searing story of young girls slipping through the cracks in society, desperately searching for friendship, family and themselves. In a world where nobody wants you, what would you do to survive?

Jane Upton's All the Little Lights was joint winner of the 2016 George Devine Award for Most Promising Playwright, and was nominated for Best Play at the 2017 Writers' Guild Awards. Produced by Fifth Word, and written with support from charity Safe & Sound, the play toured the UK in 2017, following a successful run in 2015.
REVIEWS:

"Couldn't be more timely or more important... laced with humour and full of characters to care about."

"Deeply affecting work on an urgent subject... cultivates empathy without sanitising or over-determining the characters."