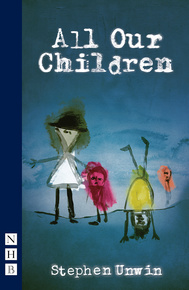 "I used to be scared of them. They seemed so different. They don't scare me any more. They're just children, aren't they? Just children."

January 1941. A terrible crime is taking place in a clinic for disabled children. The perpetrators argue that it will help struggling parents and lift the financial burden on the mighty German state. One brave voice is raised in objection. But will the doctor listen?

A moving examination of a terrifying moral dilemma, and a powerful story that shows that it takes for humanity and decency to be restored in a world that has abandoned them.

"A brave and challenging play."

"Incredibly effective... you will be hooked from start to finish."

"A gripping battle of words... what makes the play engrossing is Unwin's ability to explore both internal doubt and external conflict."

"Unwin masterfully brings to light an often forgotten part of history, with vivid characterisation and gracefully authentic dialogue. He explores this dark story with profundity, while simultaneously managing to keep it relatable and real... a deeply thought-provoking piece of theatre."

"A passionate drama... the anger and arguments at the heart of this protest piece are strong."

"Unwin's potent script creates a vivid picture of the social and moral landscape of Germany at the height of the Second World War...rich with argument and raw with emotion."

"Fascinating... it's a magnificent, brilliantly written piece of theatre which draws the audience in to an emotional state of turmoil."

"This play is very special... a moral and ethical debate of the highest quality... Stephen Unwin must already be a hot tip to be 2017's best new playwright."