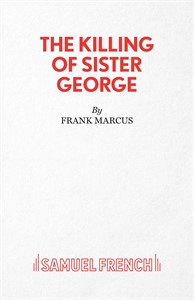 Killing of Sister George, The

"Sister George" is a beloved character on a popular BBC soap opera, a cheerful nurse who bicycles about the countryside singing hymns and doing good. In private life, June Buckridge the actress, is a swaggering, foul-mouthed, alcoholic lesbian in a long-term relationship with waifish Alice "Childie" McNaught.

Due to low rating, cut-backs and June's own bad behavior, the BBC decides to "kill Sister George" on the series. A visit from Miss Mercy Croft, a no-nonsense network executive bearing the bad news sends George into a meltdown, which results in Childie's retreat to the arms of Mercy.


Premiere Production: The Killing of Sister George was produced by Michael Codron, in association with Bernard Delfont, at The Duke of York's Theatre, London, on the 17th June 1965.