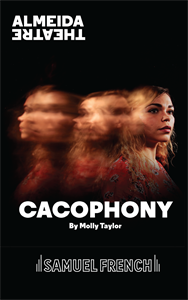 "There's me 'out there,' in public, and there's me in here. I know you think they're not the same. But they're not as far away as you think."

Created by the Almeida Young Company and written by Molly Taylor, Cacophony tells the story of a young woman's rise to fame after speaking up at a protest outside a controversial rape trial.

Weaving a complex web of fame and shame, Cacophony explores the power social media has to liberate brave new voices and, just as quickly, bring them crashing to earth. Inspired by the ideas in Jon Ronson's book, So You've Been Publicly Shamed.

"When public shamings are delivered like remotely administered drone strikes nobody need think about how ferocious our collective power might be. The snowflake never needs to feel responsible for the avalanche."

"Molly Taylor's very fine play demonstrates (...) there can still be a terrible cost and those caught in the fury of social media backlash can sometimes be undeserving of its punishing effects."

Premiere Production: Cacophony received its UK premiere at the Almeida Theatre from 26-28 July 2018, and transferred to the Yard Theatre from 19-22 February 2019, in a production directed by Michael Bryher.