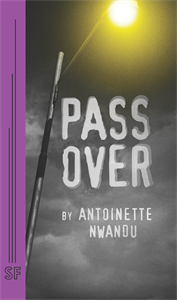 
Moses and Kitch stand around on the corner -- talking shit, passing the time, and hoping that maybe today will be different. As they dream of their promised land, a stranger wanders into their space with his own agenda and derails their plans. Emotional and lyrical, Pass Over crafts everyday profanities into poetic and humorous riffs, exposing the unquestionable human spirit of young men stuck in a  cycle just looking for a way out.

A provocative riff on Waiting for Godot, Pass Over is a rare piece of politically charged theater by a bold new American voice.
REVIEWS:

"Stunning and lyrical [...] should be on every theatergoer's 'must see' list."