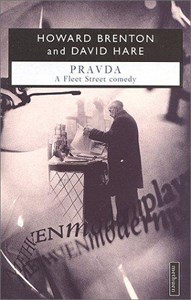 
Pravda (which means 'truth') is a satire written at the height of Thatcherism when huge political changes were afoot. The play essentially studies, through black humour and close scrutiny, the tabloid ethic and media industry as a get-rich-quick-fix.

In the programme for the original 1985 production of Pravda, Brenton wrote: "Pravda means 'the truth'. English newspapers aren't propaganda sheets. The question is, why do so many of them choose to behave as if they are?"

The character of Lambert Le Roux is a South African newspaper tycoon and the owner of several companies, striding his way through the regional papers en route to Fleet Street. Turning broadsheets tabloid, dumbing down the message, and stretching the truth, Le Roux takes no prisoners as he manipulates politicians and creates a media monopoly out of a once-respected industry.

Le Roux is bent on domination England's press as he has elsewhere in the world. As we see Le Roux accomplish his aims, we see also how the press is not the organ of truth we like to think it is. The dissemination of the truth is no longer its primary goal under the 'Lambert Le Rouxs' of our world. What is important now is what sells.

The play is an epic satire on the media in the Thatcher era; a morality tale about how Andrew, a young liberal journalist, finally succumbs to Le Roux, who makes him editor of a tabloid; and allegedly the play is a direct representation of Rupert Murdoch who, even in 1985, was a major force in media ownership.

Howard Brenton's and David Hare's first collaboration since Brassneck in 1973, Pravda was premiered at the National Theatre in May 1985, starring Anthony Hopkins and directed by David Hare, and was awarded the London Standard Best Play Award, the City Limits Best Play Award, and the Plays and Players Best Play Award.
REVIEWS: