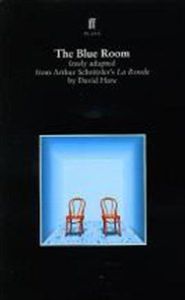 A sensation in London and on Broadway, The Blue Room depicts a daisy chain of ten sexual encounters between five women and five men all played by one actor and actress portraying the hypocrisy, the folly and the loneliness of this roundelay.

Freely adapting the original play, Hare has moved the action from turn-of-the-century Vienna to modern London and infused the sketches with witty and provocative modern nuances.
REVIEWS:

"The hottest show in town."