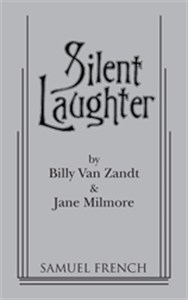 "DELIGHTFUL! An affectionate amusing tribute to the heyday of silent film comedy with romance, high and low jinks and a climactic pie fight."

Performed in black and white with title cards projected over the actors' heads, and a live theatre organ accompanying every doubletake, this comic tour de force stars a dashing hero who overcomes jail, poverty, World War I and a dastardly villain, Lionel Drippinwithit, to win the girl of his dreams. She is the heiress to the Thickwad Screw Factory, a firm that has been "Screwing the American Public since 1861."

The biggest pie fight the theatre world has ever seen caps the silent action. More than a tribute to the slapstick antics of Chaplin, Keaton and Arbuckle -- this is a reverential recreation of a bygone era.
REVIEWS:

"DELIGHTFUL! An affectionate amusing tribute to the heyday of silent film comedy with romance, high and low jinks and a climactic pie fight."

"A tour-de-force! Hilarious! Clever! This is one crowd-pleaser where you needn't feel embarrassed to be part of the crowd. Van Zandt directs the uproarious proceedings with precision and flair. An ensemble of 10, which executes gifted mime, balletic pratfalls, and operatic emotions, all with brio."

"An adoring salute to the golden age of film and an innovative twist on live theater! You won't hear a single word uttered in Silent Laughter, but the show offers quite a bit to see and hear. Silent Laughter displays a wholly original brand of 'musical theater.' There is considerable sophistication and subtlety in this production."

"An imaginative, respectful, reverential stage recreation of the slapstick antics of Charlie Chaplin, Buster Keaton, Mack Sennett's Keystone Kops, and the rest. Cleverly devised. The silence may be on stage, but the laughter is in the audience!"

"A marvel of slapstick!"

"Terrific! Utterly hilarious! A doozie! Sophisticated slapstick! A bunch of sight gags that will make you gag with laughter. A daring project! Something fresh and new to enjoy! Don't miss this if you want some old time laughs! You will be overcome with the throwing of at least 100 cream pies."

"It's a big relief to sit back and sample some simple, old-fashioned fun at Silent Laughter... Appealing entertainment for the whole family to enjoy. Silent Laughter is one of the most easygoing diversions to hit town in a while. 90 minutes of mute silliness that features pants ripping, water sloshing, prat falling, bed crashing and, of course, pie throwing. Everyone is certain to enjoy a swell time!"

"Lloyd, Keaton and Chaplin must be beaming. Van Zandt and Milmore took a chance with this piece. A chance that has paid off handsomely. We'll take a pie in the face from these two anytime!"

"A winner! The laughter is not silent. It's loud, frequent, sustained, and legitimate. Great fun!"

"Billy Van Zandt & Jane Milmore have perfected the art of the pie fight, along with pratfalls, pulled punches, and slips on banana peels in their loving tribute to the comedies of silent films. And as the star, Van Zandt sublime blends the classic clowning of Charlie Chaplin with the modern sensibilities of Bill Irwin."

Premiere Production: Silent Laughter opened Off-Broadway at the Lamb's Theatre on March 9, 2004. It was directed by Billy Van Zandt and produced by Carolyn Rossi-Copeland.