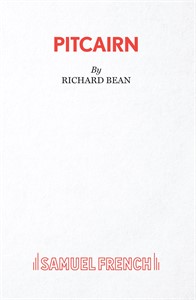 Pitcairn is Richard Bean's brutal telling of the colonisation of the remote island of Pitcairn by Fletcher Christian and the Bounty mutineers.

In the southern Pacific Ocean on the remote island of Pitcairn, the infamous mutineers of The Bounty, led by Fletcher Christian (or should it be Titreano?) begin to establish a new society alongside their Tahitian followers. Tensions quickly swell as the British settlers refuse to relinquish the vices of their past. Social, racial and sexual schisms render the once paradisiac island into a hotbed of discord and bloody violence.
Pitcairn vividly explores the conflict between personal freedoms and public responsibilities. Pitcairn is Richard Bean's brutal telling of the colonisation of the remote island of Pitcairn by Fletcher Christian an the Bounty mutineers.
The play charts -- with salty humour and growing horror -- the spiralling descent of the colony from a new Eden of freedom and equality to a brutal dystopia.