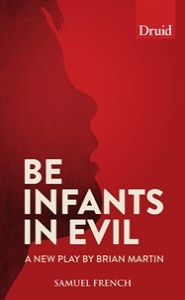 Be Infants in Evil

"In order to see the truth you must be blinded to all that is false around you..."

Father Patrick is newly appointed to a parish in Dublin, and he needs to be alone. But two of his parishioners have other ideas. Noleen, a blind widow who knows more than she lets on, wants his to hear her confession. Jacinta, an unmarried mother and recent convert to Islam, needs proof that she has left the church. And then Henry arrives -- twelve years old and on a quest of his own.

Will Father Patrick ever find peace?

Playfully comic but uncompromisingly savage, Be Infants in Evil is an outstanding debut that complicates the story of modern Ireland, just when we thought we had it all figured out.


Premiere Production: Be Infants in Evil by Brian Martin received it's world premiere at The Mick Lally Theatre, Druid Lane, Galway, on the 15th July 2014.