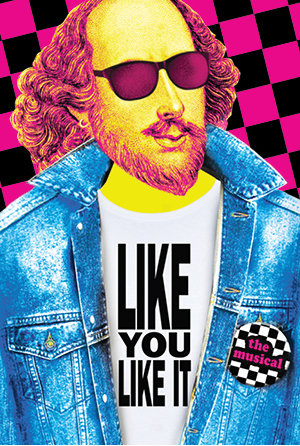 All the world's a mall in this totally awesome musical mashup of Shakespeare and John Hughes.

All the world's a mall in this totally awesome musical mashup of Shakespeare and John Hughes.

It's 1985 and the brand new Arden Mall is hosting a high school dance. Bookworm babe Rosalind wants to go with varsity wrestler Orlando, but she's never had the guts to talk to him. Rosalind disguises herself as a frat dude named Corey and discovers Orlando's true feelings for her. But things get tricky when "Corey" complicates the lives of three other couples at Arden. Rosalind will do anything to get Orlando, even if it means showing up at the dance as both herself and Corey.

Filled with memorable '80s-inspired tunes, a hip sense of humor, and heart, it all works out like you like it if you take the biggest risk of all: being yourself.
REVIEWS:

"THIS SEASON'S BEST NEW MUSICAL... Excellent songs... Who could have imagined that good times could still be had in malls?"

"A FEEL-GOOD MUSICAL... combines the thrills of High School Musical with the beloved Shakespeare comedy of errors, this high-spirited romantic comedy brings to life the Bard by way of the '80s of John Hughes' films... A delight, wildly successful."

"If Shakespeare were alive today, he would have written like this. The score is bright-eyed and bushy-tailed."

"Gleefullly sends up the era's music."